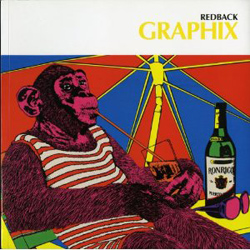 Design and screenprinting studio Redback Graphix used the power of the printed image to educate and inspire. From 1979 to 1994, Redback Graphix produced posters that combined witty graphics with eye-watering colours to give voice to a raft of pressing social issues – from AIDS awareness, alcohol abuse and human rights through to the promotion of local film screenings and benefit gigs. Originally designed for the street, these posters are now considered icons of an era and are highly collectable. The book includes a catalogue raisonné of Redback Graphix posters.

Redback Graphics is the third book to be published by the National Gallery of Australia in this new series. Supported by the Gordon Darling Australasian Print Fund, it will publish the research of scholars awarded The Gordon Darling Fellowship and other material which makes a significant contribution to scholarship relating to prints and printmaking in Australia and the Asian Pacific region.