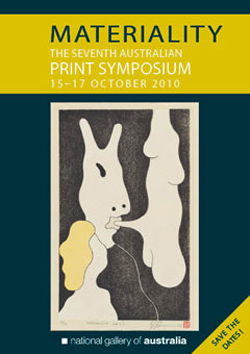 Glenn Barkley, Curator, Museum of Contemporary Art, Sydney, has a passionate interest in the replicated image – in all their various guises. He has curated the major exhibitions Multiplicity: Prints and Multiples, (MCA 2006 and touring) and avoiding myth & message: Australian artists and the literary world, MCA (2009).

Concreteness - of or relating to an actual, specific thing or instance

Angela Cavalieri is a Melbourne based artist whose large-scale lino prints and books explore the art of writing in visual form, with literary, religious and historical narratives manifest as image. Angela has been awarded several prizes including the Geelong Print Prize Acquisitive Award, 2009, the Silk Cut Print Award, 2000 and the Shell Fremantle Print Award, 1999, and has undertaken several artist residencies, the most recent in Spain.

Richard Tipping is well known for his wordplay. An artist, poet and academic, Richard is currently based in Newcastle. His most recognisable works force the viewer to rethink what they see and question the literal and contextual meaning of an otherwise banal statement.

It's because i talk too much that I do nothing.

Emily Floyd is a Melbourne based artist who creates sculptural installations and prints that playfully explore the cultural landscapes of books, films and cultural theories. She was the recipient of the Australian Print Workshop Collie Print Trust Printmaking Fellowship in 2007.

Corporeality - the quality or state of being or having a body

Flesh is the right thing.

Del Kathryn Barton’s prints, drawings and paintings are distinguished by their technical skill and vibrant, figurative imagery. Using traditional techniques and contemporary design and illustration she explores both the fantastical and corporal realms of the body. Based in Sydney, Del won the Archibald prize in 2008.

Adam Cullen’s works reveal a humour and pathos expressed through powerful mark making and bold colouration. He won the Archibald prize in 2000 and represented Australia at the 25th Biennale de Sao Paulo Iconografias Metropolitanas in 2002.

Euan Macleod produces dark, expressive paintings and prints, often featuring isolated figures in bleak landscapes. Originally from New Zealand, Euan lives and works in Sydney, and won the Archibald Prize for portraiture in 1999 and the Sulman Prize in 2001.

Reality - the state of things as they actually exist

Billy Missi is a founding member of the Mualgau Minaral Artist Collective, the first printmaking facility based in Kubin Village on Moa Island in the Torres Strait. Currently based in Cairns, Missi’s prints are published through Djumbunji Press at KickArts.

There but not there.

Jon Cattapan is a Melbourne based visual artist whose paintings, drawings and prints deal primarily with representations of the urban environment. In 2008 he was appointed an official artist for the Australian War Memorial and was deployed to Timor Leste.

From a particular view, position and perspective.

Julia Silvester’s works, be they digital prints or etched glass, re-imagine and transform historical imagery and themes by looking at them from a new perspective. Julia is currently studying towards her Master of Arts at RMIT University, where she has also been a sessional lecturer since 2001.

Palpability - capable of being handled, touched, or felt

Paul Uhlmann’s contemplative prints and artists books exude a sense of silence, intensity and wonder. Landscapes, atmospheres and everyday moments speak of a volatile and changeable world. Based in Fremantle, Paul is an artist and academic teaching at Edith Cowan University.

Feeling the way through words.

Caren Florance runs the Book Studio at the ANU School of Art in Canberra. Ampersand Duck is her private press that produces fine press volumes as well as artists books and paper works. She has recently returned from a residency in New Zealand.

How zines killed the internet.

Luke Sinclair is a founding member of Sticky and has coordinated the organisation since 2001. He worked as one of the Coordinators of Platform Artists Group between 2002 and 2006 and has worked extensively within Australia's zine culture. He is currently undertaking a Masters of Visual Arts Practice at Charles Sturt University looking at zines and home based art making practices.

Perceptible - capable of being perceived by the senses or the mind

settevoltecieco (in praise of darkness).

Domenico de Clario has exhibited paintings, drawings, sculpture, performance, installations and prints nationally and internationally over the last three decades. He is currently Director of the Australian Experimental Art Foundation in Adelaide. In early 2010 he produced a series of lithographs at the Art Vault in Mildura.

The art of not-knowing.

Lesley Duxbury uses both traditional and contemporary Print media—Photography and Printmaking—to make works that question our perceptions and recreate our experience of the natural environment, in particular the atmosphere and its phenomena. Lesley also explores the use of text in art. She is presently Program Director Postgraduate Research, School of Art, RMIT University

Now you see it, now you don't.

Marian Crawford a printmaker and drawer who has been exhibiting since 1987. She is presently Studio Coordinator of Print Media, Department of Fine Arts at Monash University. She was a lecturer in printmaking at RMIT from 1994-2002 and served as editor of Imprint magazine from 2001-03.

Physicality - of or relating to the body as distinguished from the mind or spirit.

Tim Maguire, originally known for his lithographs, has become a master in the recent technology of digital prints on a grand scale. Since 1992 he has lived and worked in France and the United Kingdom and exhibited widely throughout Europe, complemented by almost annual solo shows in Australia.

From the late 1960s Robert Jacks has produced an extensive series of artist’s books which explore variations in colour and/or formal arrangements of a defined series of imprinted marks - many utilizing the simplest of methods. He is also known for his collaborations in ‘mail art’, through series of hand-stamped postcards, Robert has held over 50 solo exhibitions.

The adventures of Joe and Josephine.

Mini Graff stencils and prints images on to a variety of media (walls, boards, vinyl, wallpaper) which strongly relate to the given environment and community, transforming an anonymous repetitive urban landscape into a unique and personal aesthetic experience. Mini Graff’s recent Suburban Roadhouse series explores concepts of trademark and ownership in public and domestic environments.

Experience - the act of living through an event

Djumbunji Press opened at KickArts Contemporary Arts in Cairns in 2009 and provides a centre of excellence and innovation in printmaking for artists from Far North Queensland, Cape York and Zenadh Kes (Torres Strait). Rae O’Connell has been Director of KickArts since 2002.

Nomad Art Productions is a Darwin-based gallery and fine art publishing business established in 2005 that commissions limited edition prints from Indigenous and non-Indigenous artists in a cross-cultural environment with a focus on promoting reconciliation, understanding, relationships and equity.

Big Fag Press is an artist-run printing collective in Sydney that produces prints for artists and activists in their networks on a rescued FAG 104 Offset Proof Press, called “The Big Fag”.