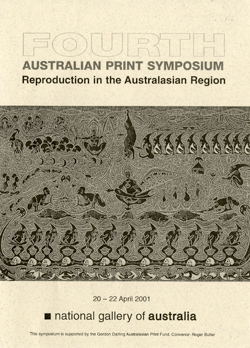 Reproduction in the Australasian Region

This symposium was supported by the Gordon Darling Australasian Print Fund

The Fourth Australian Print Symposium was held to coincide with the major exhibition Islands in the sun: Prints by Indigenous artists of the Australasian region.

The art of reproduction.

Edward Colless, Senior Lecturer, School of Art, University of Tasmania. His book of selected writings The Error of My Ways was published by the Institute of Modern Art, Brisbane in 1995. ‘Edward Colless is one of Australia’s finest writers...an unclassifiable, border-crossing poet, he dissolves the conventional lines separating art criticism, fiction, reverie and autobiography.’ (Adrian Martin)

Alison Munro is a Canberra-based artist

John Young is Melbourne based artist who uses replicated images in his paintings.

Penny Mason is a Launceston based artist, Lecturer in Painting and Drawing. School of Visual and Performing Art, University of Tasmania

Melanie Eastburn was the inaugural recipient of The Gordon Darling Fellowship for the Study of Australasian Prints.

Marian Maguire artist and printer, established PaperGraphica, in Christchurch, Aotearoa New Zealand in 1995. Like The Limeworks, which she established in 1987, the workshop specialises in lithography. Marian has printed the works of Ralph Hotere and John Pule, among others.

Michel Tuffery is a Pacific Islander printmaker and performance artist based in Aotearoa New Zealand.

Nigel Lendon is a Reader in Visual Arts and Deputy Director, ANU Canberra School of Art.

Meeting of the Waters; a dialogue in visual language.

Jan Hogan is a Darwin based artist. Jan Hogan was a coordinator of the Australasian Print Project at the University of Northern Territory, Darwin.

Here, there and almost everywhere.

Clive Barstow is Senior Lecturer and Co-ordinator of the Printmaking programme at the WA School of Visual Arts, Edith Cowan University.

A life in woodcuts: L’Appassionarta.

Salvatore Zofrea. Sydney based artist who over the last decade has produced a series of narrative woodcut suites.

The humble linocut in the age of digital technology.

G.W.Bot. Canberra based artist who works extensively in linocuts.

Not Picasso's invention - a foray into the history of reductive linoprinting.

A tear in the fabric.

Heather Shimmen is a Melbourne based printmaker. Her innovative use of the linocut technique gained her the Grand prize in the Silk Cut Awards for Linocut Prints in 1998.

Kim Westcott is a Melbourne based painter and printmaker, Westcott has worked at the Australian Print Workshop, Melbourne, and with Garner Tullis, New York. A monograph on her work was published by Craftsman House, Sydney in 1998.