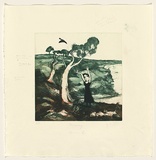 Unfortunately the location could not be loaded.

etching and aquatint, printed in green and brown inks, from two plates

edition of 50; plus black and white versions; five artist's proofs; one workshop proof; one printer's proof

Inscriptions or device by artist or designated agent

Inscriptions or device by others involved in the works production

Inscribed with printer's notes around printed image in black pencil.

Gift to the National Gallery of Australia, from Studio One Inc print workshop on its closure in 2000, Canberra, 2004.