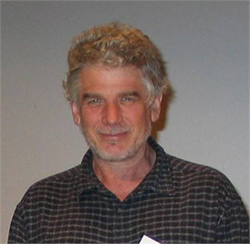 Roger Butler joined the National Gallery of Australia in 1981 as the inaugural Curator of Australian Prints, Posters and Illustrated Books. The Department was amalgamated with that of Australian Drawings, Watercolours and Sketchbooks in 1997.

During his years at the National Gallery Roger Butler has established the foremost collection of prints, posters and book arts of the Australasian region. The collection now numbers over 37,000 prints from Australia (including Aboriginal Australia), Aotearoa New Zealand, Papua New Guinea and the Pacific Islands. The Drawing collection now holds over 30,000 works, including watercolours and artists sketchbooks.

Roger Butler has written widely on Australian prints, curated exhibitions and lectured on the subject as well as participating in arts organisations. Major exhibitions and publications include Thea Proctor, the prints, with Jan Minchin (1981), The prints of Margaret Preston (1987, revised 2005); Poster art in Australia (1995), Sydney by design, wood and linocuts by Sydney Women artists between the wars (1995), The Europeans: Emigre artists in Australia 1930-60 (1997), Islands in the sun: Prints by indigenous artists of Australia and the Australasian region (2001), place made: Australian Print Workshop 2004 and in 2007 The story of Australian printmaking 1801 - 2005 and it's associated publication Printed images in colonial Australia 1801-1901 and Printed images by Australian artists 1885-1955.

A past President of the Print Council of Australia (1986-90) Roger was one time editor of their magazine Imprint (1987-90). He also served on the board of Studio One Inc printmaking workshop, Canberra (1987-95).

Roger Butler is the initiator and has been the convenor of the Australian Print Symposiums held at the National Gallery every three years since 1989. In 1997 he initiated the WEB access project http://www.australianprints.gov.au, in 2001 The Gordon Darling Fellowship for the study of Australasian Prints, and in 2002 the Gordon Darling Graduate Internship. All are key initiatives in making the Australian print collection at the National Gallery widely known and accessible.

After his secondary school studies at Macleod High School, Roger graduated in sculpture at Prahran Technical College, Melbourne, he then undertook post-graduate studies at the National Gallery of Victoria School (now Victorian College of the Arts) and secondary education studies at The Hawthorn Teachers College, Melbourne. After travelling in Europe in the early 1970s he started to systematically research the history of prints and printmaking in Australia. He later worked freelance, writing catalogues for Deutscher Fine Arts in the late 1970s. He also did occasional work for public galleries and was the curator of a major touring exhibition Melbourne woodcuts and linocuts for the Australian Galleries Directors Council in 1981.

His interest in Australia’s position in the Asia/Pacific region is reflected in the departments’ acquisitions, lecturing and travelling exhibitions. The exhibition Islands in the sun: Prints by indigenous artists of Australia and the Australasian region, travelled to Papua New Guinea, Aotearoa New Zealand, New Caledonia as well as mainland Australia. Roger Butler has presented exhibitions of Australian prints in all states of Australia as well as in Thailand, Bangladesh, Papua New Guinea, Aotearoa New Zealand and New Caledonia. He was a Commissioner for the 7th Asian Art Biennial Bangladesh, 1995 and the Busan International Print Art Festival 2005 in South Korea. He has also presented workshops in various aspects of museology and professional practice in Australia and the Australasian region.

Roger Butler has a particular interest in access initiatives for large works on paper collections. In the 1989 he utilised microfiche in conjunction with a printed catalogue, research was first published as a CD rom in 1992 and in the web access project http://www.australianprints.gov.au/ established in 1997. In 2002 he was awarded a Gordon Darling Foundation overseas travel grant to look at innovative means of making collections accessible. He has been the NGAs representative to the National Library of Australia initiative Pictureaustralia and is on the working party of the University of New South Wales Dictionary of Australian Art Online (DAAO).

On Australia Day, 26 January 2011, Roger Butler was appointed a Member (AM) in the General Division of the Order of Australia 'For service to the visual arts'.

Roger Butler retired from his position in June 2020 and is now Emeritus Curator of Australian Prints and Drawings at the National Gallery of Australia.